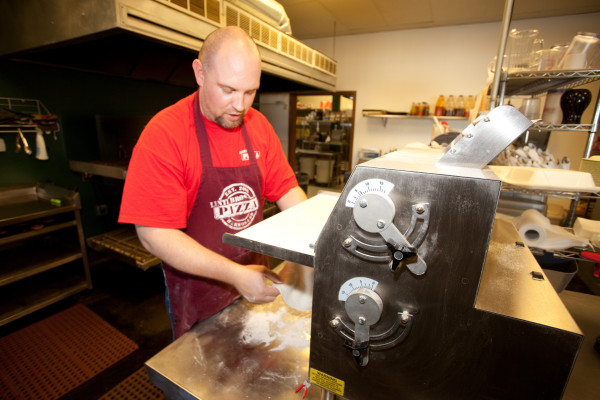 Lintz Bros. Pizza started with a crappy 1977 Chevy Impala and a family friend named Charlie Decker; at least, that’s where the tradeoff for the original pizza recipe came from. My folks, Jim and Brenda Lintz, were operating the South 60 Campground three miles south of Hermosa on Highway 79. Charlie had called them up and asked them to consider selling pizza at their business. After one bite, it was a no-brainer and my folks agreed. Charlie helped them out by giving them the recipe as well as a large brick oven. They were able to build a modest, local restaurant. Several years into selling pizzas and after one of my summer basketball trips, I returned home to find my 1977 Chevy Impala gone. It was my first car, and my Grandparents had given it to me. It had its problems sure, but it was free and that’s all that mattered. When I asked my father where it had gone, he informed me that Charlie had called and would be leaving the area. He was down on his luck, so Dad gave him my car. I tried to object but when dad asked me how much I had paid for it, I quickly rescinded my objection. We were to consider that a trade for the kindness that Charlie had given us with our start in the pizza business. Who knew that Highway 79 would be scheduled to go over the top of their restaurant just two years later?

While sitting at Mom and Dad’s having coffee one morning, I received a call from Mark and Bruce Hanson, they were the sons of Wes Hanson and the current owners of Mt. Rushmore Telephone Company. Dad and I always used to joke with Wes about them needing to move a building closer to Hermosa, preferably on Highway 36. We had forgotten about those talks until that phone call. His sons told us that Wes had died earlier that year and that he made them promise to talk to Dad and me when they started looking to build. It took me less than a minute to say yes and, less than a year later, Lintz Bros. Pizza was established.

Lintz Bros. Pizza has been open at our original location, one mile south of Hermosa, since September of 2005, and we are doing great. I wanted Lintz Bros. Pizza to be a place where family and friends can come and enjoy an excellent meal with an affordable price attached to it. Not only have we achieved that, but we’ve established ourselves as a local favorite for pizza in the Black Hills. We thank God, Charlie, the Hansons, and YOU every day for making Lintz Bros. Pizza a part of your family experience, and we look forward to seeing you again.

Come visit Lintz Bros. Pizza for the best pizza in the Black Hills!